Letting Go and Streamlining Your Life with Astrid from The Miami Minimalist. 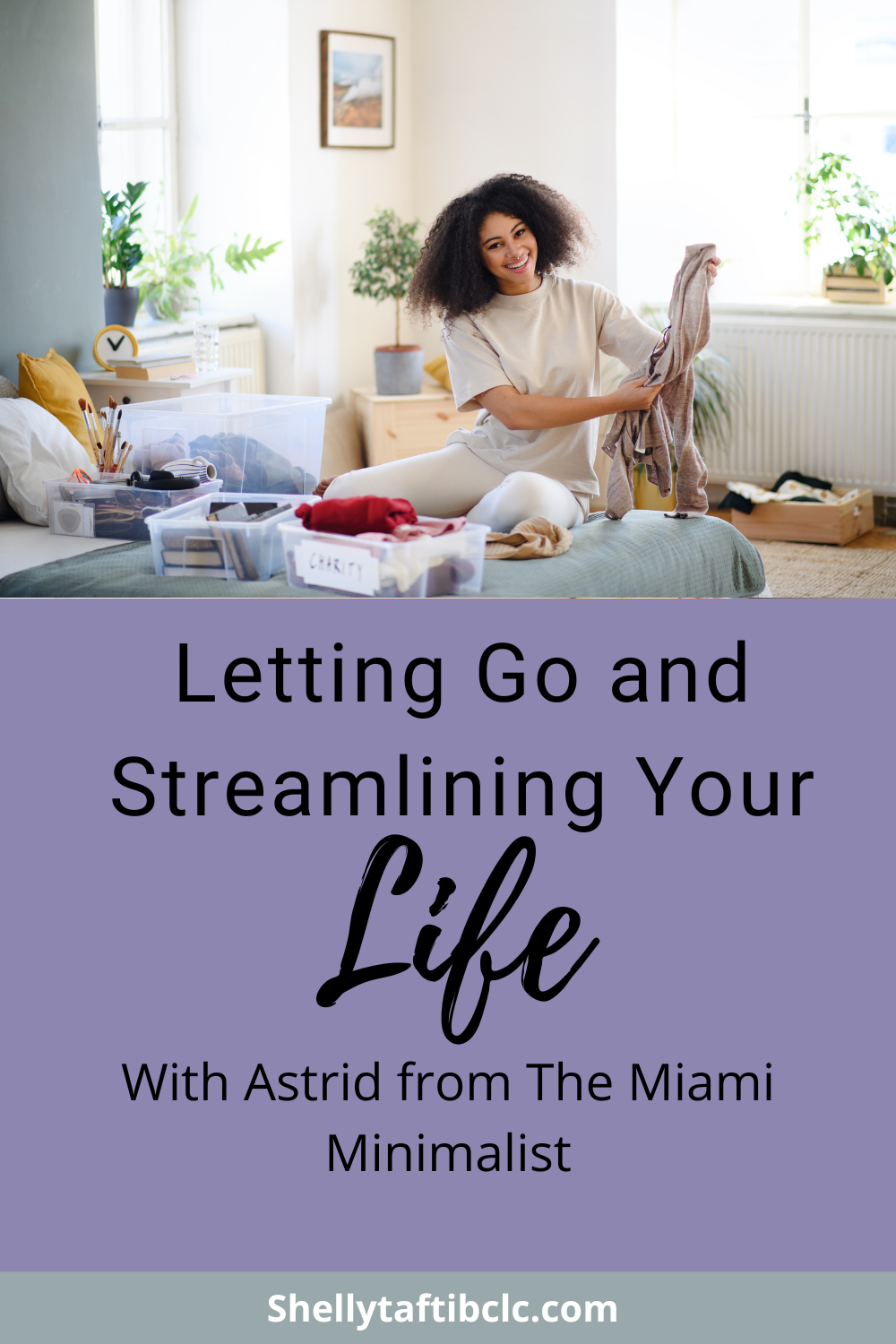 I recently spoke with Astrid from The Miami Minimalist about tips for streamlining and decluttering your life and how it makes your parenting journey easier.

Can you tell us a little bit about yourself?

Okay, so my name is Astrid. I’m 32, I live in Miami. I’m a postpartum nurse, and I have two kids. One’s four and a half. The other one is two and a half. My passion is minimalism and helping moms declutter and simplify their life.

For those who might not know, what is the minimalist lifestyle?

So why would someone want to follow the minimalist lifestyle? What benefits can it bring you?

It has financial benefits. When you’re not purchasing as many things, you are obviously saving money and not spending as much. It can reduce your stress. Some studies have shown that women especially are affected by clutter the most. The cortisol levels rise with the amount of stuff that they have and the amount of visual clutter that they see.

If you’re ADHD, you actually benefit also from having a clutter free home because you’re not constantly thinking “I need to put this away.” The simpler, the better. And you also clean up less, which I love. You’re not putting away as many toys, your clothes, you have the stuff that you need and that you use, and that’s what you take care of.

Is minimalism sometimes seen as a form of deprivation in a way? Do some people view it as not being allowed to buy new things, or you’re not allowed to spend money on certain things?

I have heard people say minimalism is boring. You have white walls, no decor, etc. But it’s not a one size fits all. If you like decor, if you like color, if you like these certain things, you can totally have them. It doesn’t have to be plain and boring.

It sounds almost like instead of deprivation, it’s just more intentional consumerism.

Sometimes people will buy things just because they saw it on Pinterest. I’ve decluttered so many homes where even with the decore pieces, people tell me, ‘I don’t know why I bought it, it’s ugly. I just saw it on Pinterest and I liked it and I bought it but it didn’t fit my lifestyle.’ or ‘My friend gave me that decore piece, but it doesn’t really spark joy within me.’ So it’s about finding things that really does bring you happiness and joy.

Tell us a little more about how you work with families and help them declutter?

When I help people declutter, I will hold something up, and if the reactions is similar to ‘yeah, like, I use it sometimes,’ or ‘It’s all right’ then I know they don’t love it. They are just using it because they feel like they have to, or because they spent the money on it.

When I hold up something up that they love, their face lights up, and they’re like, ‘oh, yeah, I love this one.’ And that difference is so key! That’s what you want to keep – the things that light you up and the things that actually you want to use.

When you’re working with new parents -because new parents are busy and they’re already overwhelmed, even the thought of decluttering and getting rid of things can be extremely overwhelming when you’re trying to take care of baby and toddler or whatnot. What advice would you have for new parents on how to overcome that overwhelming feeling when you think about starting and to just start?

If you don’t have any kids and you’re pregnant, I recommend decluttering before the baby comes. Because once the baby comes, for the first three to four months, you’re in survival mode. You’re not going to be thinking about anything other than feeding your baby, getting sleep and eating yourself.

During that survival mode, I definitely don’t want to focus on decluttering or anything like that, so if you don’t get it done beforehand, then I would recommend scheduling it like an appointment. So for 30 minutes on Monday, you’re going to declutter an area. And always start small because a lot of people come to me and they’re say, ‘This room is horrible.’ So I would say schedule it out, start small.

When I was doing it, I would have my mother-in-law take care of my kids certain days and just go at it for a few hours. But if you don’t have that time, put on a show for them and do an area of your house.

So what about if you as a family or you as a parent decided to declutter but the rest of your household is not on board with it? Maybe your partner, your spouse, doesn’t want to throw away any stuff. How do you mediate that? What tips do you have for parents in this situation?

I would say start with yourself. So focus on your stuff and your areas of the house that you more or less have control over, rather than telling people what to do. Because, let’s say your husband has a lot of stuff, but you have a lot of stuff. You’re telling him to declutter, he’s going to think, ‘What about you?’ You need to declutter yourself.

I definitely believe in being the role model first, and then I think eventually they’ll see you do it and want to do it themselves. That’s what happened with me. My boyfriend didn’t have a lot of stuff, but once he saw me doing my own areas of the house and saw how serious I was about it, he was more willing to evaluate his things and saying, ‘oh, yeah, I really don’t need this’ and then letting it go was easier for him.

Maybe not specifically. I haven’t seen it myself because I haven’t worked with a lot of new moms with their clutter at home, but I know that having clutter doesn’t help. For me, I know when I was trying to spend time with my baby and bond with them, I would look around just focus on everything I had to do rather than my babies at that time.

And I wish I could go back and had a simpler lifestyle back then because it definitely would have made a difference. Instead of feeling like calm and happy, I would just feel really overwhelmed with everything I had to do. On the weekends, I’d spend it cleaning instead of bonding as a family with my boyfriend and the kids. I would just look around and cry.

I think that starts during pregnancy. Because you’re pregnant, you go to the baby store to create a registry and they print out a literal 18 page long list of everything you “need”. At least with my first,I remember we were at the store for like 2 hours because we were very young when we had babies and we were very ignorant about babies. We just thought “this is what good parents do.” They check off the products that they want and we got so much stuff, most of it we never used.

Right! When I was creating my baby registry, I would ask moms who had multiple children, not the first time moms, because I knew the first time moms would suggest getting everything. I would ask the mum who had three or four kids and they’d tell me what I did and didn’t need. That’s how I created my list. It was so minimal that some of my friends would complain that they didn’t have anything to get me.

Sometimes I will be talking to families and we’ll be joking about grandparents “spoiling” their grandchildren. The family members, like grandparents, aunts, uncles, just buy, buy, buy, buy, buy.  The holiday time can be insane with the gifts. So if you’re trying to minimize the stuff that you have in your house and not have mounds of toys around your house, but your family is not really following your vibe, how can you communicate that without insulting everyone?

I am a really direct and honest person. I wasn’t mean about it, but I did tell everyone, “Look, we’re trying not to have as much stuff in our home, so I would really appreciate not buying as much for the kids.” When they would ask me, “What do we want for the kids?” A membership to the zoo, a membership to the children’s museum, college money, things like that, that they’re actually going to need.

I think I’ve been reading a lot about putting your money towards experiences rather than material things and how that increases happiness in people’s lives. And also, they’re not going to remember their material toys, but they will remember that great vacation. And it just makes sense if you think about it.

When we die, we don’t take any of our physical stuff. But at the end of our life, we’re remembering how we felt in our childhood, how we felt growing up. We remember if our mom was overwhelmed with the cleaning. We remember if she was constantly yelling at us to clean up, etc.

It doesn’t mean that you can’t buy stuff. My kids get toys, and it’s okay, but it’s about not keeping it forever, and donating it when you’re done with it.

Have you faced a situation yet where your kids are at someone’s birthday party and watched them open 50 gifts, and how come I don’t get to do that? Is that a challenge that you’ve come across yet?

I’ve never heard them say anything like that. And my daughter is pretty vocal. She does enjoy going to a certain friend’s house and stuff and playing with their toys, but she knows it’s their toys. She never comes home and says, “I want that” or “Buy this for me.” It’s never like that.

I noticed on your Instagram that you have a lot of out of the box decluttering suggestions that I never would have thought of. For example, you had one post about decluttering your email inbox where you don’t just delete it an email, but also unsubscribe. What’s a good way to start with that?

There was an app and I don’t remember what the name of the app is now, but I believe that it unsubscribes from everything. You can pick and choose which ones to unsubscribe from. And what I realized from that subscription, that app is that some companies will give your email address to other companies, which I didn’t realize. I think I had like 900 subscriptions and I didn’t remember subscribing to most of them. Some companies were totally unfamiliar to me. Now I don’t subscribe to anything. Ten percent off? I don’t care, don’t send me any emails.

But my tip is just to set aside time and just do it. It’s not going to get done unless you just sit down and do it. Maybe have a goal of five a day or whatever you can handle.

Thanks for joining us today, Astrid!