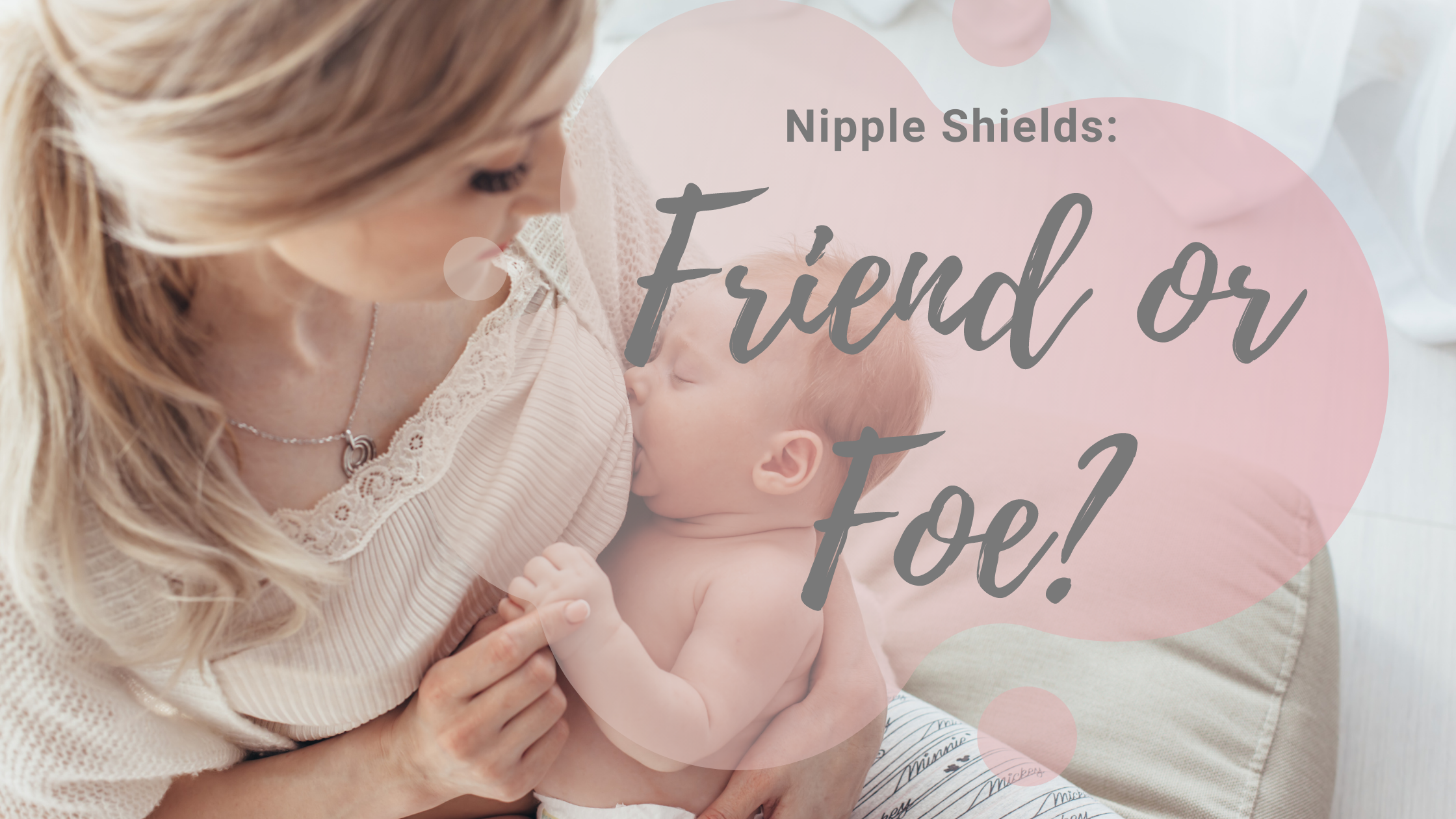 Nipples shields seem to be popping up more and more in the breastfeeding world. Many parents are being handed nipple shields while still in the hospital, and I’ve even seen it being listed on baby registries! While nipple shields can be helpful with lactation, are they the miracle solution to breastfeeding problems that some parents are led to believe they are?

What is a Nipple Shield?

A nipple shield is an artificial nipple that is meant to be placed over the parent’s actual nipple while breastfeeding. The baby latches onto the shield with the parent’s nipple inside the shield.

Nipple shields have been around since the 1500s. Today they are typically made out of thin silicone, but in the past they have been made out of materials such as hollowed nutmegs, wax caps, silver, ivory, wood, rubber, and even lead!

Typically nipple shields are used in cases of flat or inverted nipples; to help damaged nipples heal; or to help a baby latch who is having difficulty latching to the bare breast.

Are Nipple Shields Friend or Foe?

So Do Nipple Shields Actually Help?

Let’s look at what the research says:

One concern with nipple shields is a lower milk supply while lactating because of less direct stimulation to the nipple and less transfer at the breast. The research has shown that this can be the case in the past with thicker rubber or latex shields.

In a different study, latex shields reduced milk transfer by 32%, and babies actually transferred more milk without the shield.

More research is needed around the thin silicone shields that are used today. We have some studies that show the thin shields do not effect transfer at the breast, but there were limitations with those studies.

We do have some research with preterm infants!

According to one study, preterm infants were able to transfer significantly more milk at the breast with the thin shield than without a shield.

So we know that is some cases, nipple shields can actual result in the transfer of more milk, mostly with preterm infants.

As an IBCLC, anecdotally I have also seen babies transfer more milk with the shield in cases of tongue tie, high palates, low tone, or lack of fat in the cheeks.

What About Nipple Shields For Nipple Pain or Healing?

In my own practice, sometimes I have found that nipple shield can allow a parent to latch when they were previously avoiding it due to nipple pain. Depending on the situation, using a shield can sometimes allow the nipple to heal while we work on the issue causing the nipple damage to being with.

There have been case studies documented where nipple shields were helpful with extreme nipple pain when used with the guidance of an IBCLC.

Can Nipple Shields Help With Latching?

Many lactation consultants have used shield to assist a baby who is unable to latch. Benefits of a shield that may help a baby latch is that it form a teat in the baby’s mouth in cases where a parent has truly flat or inverted nipples.

In my practice, I will sometimes use nipple shields with babies who are going through breast rejection due to bottle preference. Other lactation consultants have written about how nipple shield have help their clients in these situations, too.

Can nipple shields help parents continue breastfeeding? What do the parents think?

Well, there are studies that show yes, they can!

In one study, 90% of the parents reported that they found the nipple shield to be helpful, with 67% reporting that the nipple shield kept them from quitting breastfeeding and switching to exclusive formula feeding.

Another study showed that 72% of parents found shields helpful and allowed them to continue to breastfeed in cases where they might not have otherwise. According to this study, the average use of a nipple shield was six weeks.

Other studies were also done that showed parents reported the shield to be helpful.

Okay, So What’s The Bottom Line? Do They Help or Not?

This is a tough question to answer, because every parent and baby is different and it really depends on the situation.

This is what I do suggest:

If you are looking for help weaning off from the nipple shield, you can book a consult here.

Did you use a nipple shield? Did you find it helpful or harmful? Tell me your story in the comments!